Hotel Technology through the ages: The 1950’s 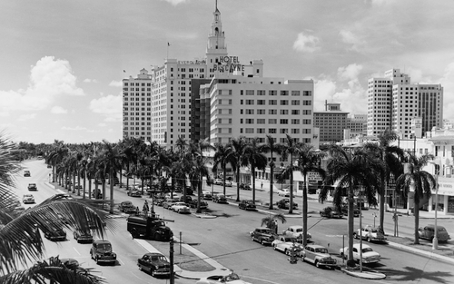 Part of a new blog ‘Mini-Series’ where we are looking at the evolution of hotel technology – both staff-facing and guest-facing – and its impact on the guest experience.
Technology has probably done more to shape our expectations and preferences of our hotel stay than any upgrade or freebie could offer; and if it wasn’t for these advancements in the 1950’s, our hotel experience might look and feel a bit different today. However, while hotels have evolved a great deal since and while some changes are for the better, some items make us nostalgic for those clichéd “good old days”.

Hotels have been around a long time, popping up in the US during the 18th century; but it wasn’t until the beginning of 1950s that the lodging industry started to explode. With the end of the Second World War, combined with affordable cars and a comprehensive Interstate system, the economies of the western world boomed and led to the start of a consumer-led economy.

While many considered the 1950’s as one of the most conservative decades, it was a time when technology underwent a dramatic evolution.

Booking and checking-in: Before the 1940’s, reservations were booked by mail, telegram, or telephone, and often resulted in lost or forgotten reservations. It was only in 1947 the first hotel reservation system ‘Hoteltype’ was established by Westin. The new machines enabled instantaneous confirmation of reservation requests. Roughly ten years later in 1958 Sheraton advanced Westin with the introduction of ‘Reservatron’, the industry’s first automated electronic reservation system, and the first toll-free reservation number.

Pricing: The average room rate would have set you back approx. $5… per night! (Gasoline was a little less than 20 cents a gallon too – those were the days!).

In room features and entertainment: In the 1930’s “air-con” was introduced; by the early 1940s air conditioning and “air cooling” become prevalent and so by the time 1950’s came around it was an expected amenity.

Prior to the 50’s only a select amount of countries had television available; with massive growth throughout the decade, by the end of the 50’s almost the entire western hemisphere had television. If you were lucky to stay at the Hilton, they were the first chain to install television sets in all their guestrooms back in 1951.

In the Mid 1950’s the Atlas Hotels developed the first in-room coffee concept (where would we be without our in-room tea and coffee!) and in 1957 Hilton began offering a direct-dial telephone service.

Payment: With the explosion of hotel stays in the 1950’s (while at only $5/night) they needed to be paid for somehow, and while cash is always a viable option, it was the 50’s that saw the introduction of the very first credit card. While The Diner’s Club Card was the first to launch, it was exclusively for restaurant dining and expected full payment each month. But in 1958, American Express’ was introduced and with it offered consumers staggered payments and “free-range shopping”.

Check us out next week when we’ll be looking at the hotel stay of the 1960’s and what additional “technological” advancements they had on the previous era and also how they compare to hotels of today!