The Rise of the Robot Butler: Fad or Future of Guest Service? 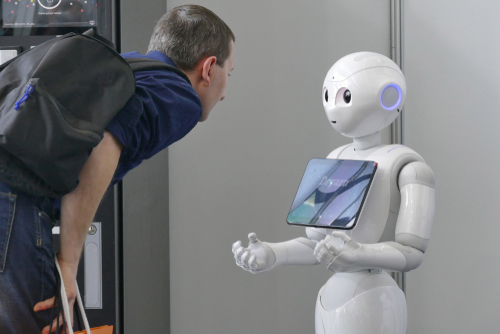 With the advent of motion pictures, science fiction writers’ have often provided prescient glimpses of future technologies. These inventions and happenings that were once dreamt up in the pages of fantasy novels and the far-flung corners of the imagination seemed like futuristic impossibilities. However, many have moved into the realm of reality; Google Glass and robots all had roots in films such as Blade Runner (1982) and Back to the Future (1989). Self-driving cars took to the roads in Total Recall (1990). Now, they’re being tested in Nevada as driverless Google cars. Videophone communications, 3-D printers (replicators), computer speech recognition and the most iconic handheld communicator (mobile) all made their debut in the Star Trek franchise. And now experts predict that within 10 years general-purpose robots, will perform household chores while consumers are at work; or serve as butlers at cocktail parties.

Are Robots the way of the future?

Well, “robots” have already been deployed in many industries for a long time. They have been imagined as a facet of the future ever since Fritz Lang’s Metropolis and while they seem like a relatively new addition to our lives, one of the world’s first working robots named Unimate joined the assembly line at the General Motors plant in Ewing Township as far back as 1961, revolutionizing the industrial workplace. Since then robots have routinely been used in the mechanical industry for cutting, grinding, for assemble products, for picking, packing and palletizing to name but a few applications. And in recent years, robotics has found its way into the everyday consumer life, changing them in fundamental ways. While not necessarily in the shape of a humanoid, from drones to smartphones, from Apple’s Siri to Amazon’s Alexa, these forms of robots are already doing a lot of the things we can do, except now they’re often doing them better.

Robots in the hospitality industry?

At first sight, it might seem like a gimmick. 50 years ago, people would have scoffed at the idea, but now at the rapid pace in which technology is changing, this has become very much a reality. Hotels across the US from the Westin in Buffalo, New York, to the Sheraton Los Angeles San Gabriel Hotel, are experimenting with using robots and AI as part of the guest experience in their hotel. Back in 2014 Starwood hired a robot butler – Botlr – to work back and front of house across its hotels in the US. “The guests really love the robot here…We place it near the front door and people ask it questions when they arrive. It is really handy if we are busy at the desk and a guest wants something like a towel.” Ankit Dhakal, the hotel’s Front Desk Manager. InterContinental Hotel Group (IHG) trialed delivery robot Dash as its Crowne Plaza hotel in Silicon Valley. The three-foot-tall machine which delivers snacks, toothbrushes, and other amenities to guest rooms – travels at walking pace and can navigate floors by using the Wi-Fi to call lifts. Hilton Mclean in Virginia partnered with IBM and is using ‘Connie’, a robot butler as their concierge. Connie provides basic information such as the spa and gym timings, location of the nearest bank, things to do as well as personalized information for a guest’s needs.

There is no doubt that the use of robots within the hospitality industry is becoming a more commonplace trend and it’s not hard to see why. Robots are seen as being more efficient, better at dealing with different languages and handling data than their human counterparts. In certain situations, robots can perform with a greater degree of accuracy and consistency than humans would be able to, and ‘human error’ is eliminated.

While they regularly come under hefty criticism that they will supplant human employees and in particular replace the human element in service industries. However, this has been counterbalanced by praise for the significant labor efficiencies, improved social rankings and revolutionized customer service experience noticed in robot-staffed properties. They can be worked harder than humans and increase a hotel’s brand visibility in a fun and unique way. Not only that but robots and AI are emerging as valuable solutions for those operating in the hospitality industry by taking over the monotonous, time-consuming tasks and performing simple jobs such as greeting arriving guests, storing luggage, delivering food and laundry to rooms etc. and in doing so are freeing up hotel staff to carry out more complex tasks, offering more on-site guest interaction, more time to focus on the guests and creating a more, ever-expected, personalized guest experience.

So, robot butlers, are they a fad or future of guest service? The answer is they are already changing customer service. Robots are, and will continue to be, a popular technology trend within the hospitality industry because ideas of automation and self-service are playing an increasingly vital role in the customer experience. The use of robots can lead to improvements in terms of speed, cost-effectiveness and even accuracy. Hospitality is a natural fit for this type of technology so it seems inevitable to play a major role in future businesses.