The Evolution of Hotel Technology-From Legacy to Mobility 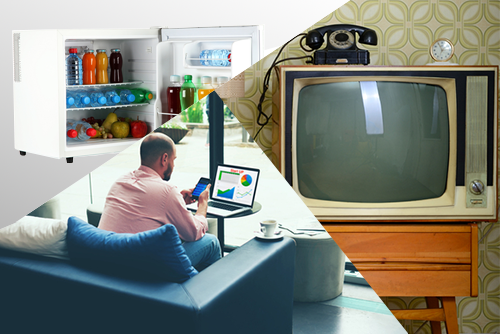 Before the 60s, guests were lucky enough to have air-con, possibly, complimentary in-room tea and coffee facilities not to mention an in-room TV! The industry itself had launched the first automated electronic reservation system and the first toll-free reservation number.  American Express had introduced us to the idea of portable, flexible credit! This was all before, hotel technology was even a thing.

The 1960s – 24 Hour Room Service + Mini-Bars: The 1960s itself was dominated by wars, civil rights and assassinations but it was also a decade that brought us the Beatles and began a space race that ended in a moon landing! In the hotel world, Inter-Continental was an industry first to introduce a number of new amenities, such as retractable drying lines in guest showers, ice and vending machines in guest corridors and business lounges. Travelodge debuted wheelchair-accessible rooms and Westin was the first hotel chain to implement 24-hour room service. But the minibar was probably one of the most fascinating things to be introduced in the 1960s; created by the German company, Siegas, it was rapidly adopted by many luxurious hotels and became an expected perk at high-end chains. Despite the high mark up (even then!), guests indulged on the snacks and beverages on offer. However it wasn’t really until the 1970s that the mini-bar went mainstream; when Hilton Hong Kong decided (as a trial) to stock its minibar with alcohol they literally saw sales increase by 500% overnight. With the possibility of creating a new and effective ancillary revenue stream, other hotels began to quickly follow suit.

The 1970s – In-Room TV + Concierge services: Television sets may have made an appearance in hotel rooms in the 1950s but it was in the 1970s, with the permanence of color, that TV saw significant changes. It was the decade that introduced us to Dallas and M*A*S*H, the ESPN channel and premiered shows such as SNL and Good Morning America. As television grew in sophistication so did the demand for its service; the Sheraton-Anaheim was the first to offer free in-room movies in 1973; this was then closely followed by two hotels in Florida who were the first to offer HBO, and a year later, both Showtime and The Movie Channel made their debut.

By mid-1970s we began to see the start of branded amenities being introduced; Four Seasons offered their own name-brand shampoo! Hyatt was an industry first when it opened its Regency Club; a concierge club level that provides the ultimate in VIP services, and Days Inn established the first seniors program.

The 1980s – PCs, Reservation Systems, In-room Phones + Keycards: However, it was in the 1980s that we all started to get a little bit more technical; if it wasn’t for a number of technologies that got their start in the 1980s, life and work as we know it today might be a little different! It was in July of 1980 when IBM took the PC out of a niche market and put it mainstream. While it might have had a starting price tag of $1,565 in the early days, by the end of the ’80s, the world was in the midst of the PC revolution. Apple announced The Macintosh in 1983, and in the same year, Motorola came to the market with its version of the cellphone. Microsoft launched in 1985 and to round off the list of advancements for the decade the concept of the World Wide Web / the Internet was introduced.

But it wasn’t just the computer giants (as we know them today) that were making significant changes, hotels were also making some sizable technological advancements of their own. In 1983, Westin was the first major hotel company to offer reservations and checkout using major credit cards, and in 1986 Days Inn managed to create and provide an interactive reservations system capability of connecting all of its hotels. In the same year, Teledex Corp introduced the first telephone designed specifically for hotel guestrooms, VingCard, now ASSA ABLOY, invented the optical electronic key card and Holiday Inn was the first to offer a centralized travel agent commission system.

The 1990s – Cellphones, Laptops, Internet, Websites + Online Booking: Following the technological developments of the 1980’s, IT became a major global industry. By the mid-1990s, computers had become an indispensable part of everyday life; they were standard in most workplaces and computer skills were considered essential in many occupations. In a short space of time offices took on a new form, going from 100% computer-free to becoming a deeply embedded component of the daily grind. And while the advent of computers in the workplace made many operations faster and more efficient, it was the huge potential that came with the Internet that turned out to a game changer. Throughout the 90s, it proved to be one of the greatest communication advances of our century and quickly became embedded into the fabric of society. By creating a direct line of communication between people all over the world, vast amounts of information could be easily accessed and shared. Search engines, both Yahoo and Google came into being, and suddenly the world became much smaller and more accessible.

Hyatt Hotels and Promus Hotel Corporation were the first to take advantage of the Web by launching their very own websites in 1994. The first online hotel catalogue, Travelweb.com, also made its debut in the same year and in 1995 Choice Hotels International and Promus were the first to offer guests real-time access to central reservations. Choice and Holiday Inn were the first to introduce online booking capability – and again, it was Choice who was the first chain to trial in-room PCs as a standard guest amenity.

With computers well established, society hooked on the Internet and mobile devices fast becoming the norm in the hands of average consumers, one last development would launch before the end of the decade, ahead of Y2K (remember that hype!)…  Wi-Fi! In August 1999, six companies came together to create the Wireless Ethernet Compatibility Alliance (WECA), and ahead of the 2000’s, it was a development that was about to “inspire a mania unseen since the days of the internet boom”.

The 2000s – Wi-Fi, iPhone, Apps + Mobile technology: The 2000s saw radical changes in how technology developed ( is still developed) and also in how it is used and is being adopted by companies and consumers. In the early 2000s, dependence on the laptop as a necessary tool for work increased and mobile phones became the device to have with you on the go. While hotel Wi-Fi began to steadily increase in 2003 with more than 6,000 hotels making it available to guest,s it was the release of the iPhone in 2007 that marked a change in views on technology and mobile. It became the world’s first advanced smartphone, offering customer friendly features such as a touch screen interface and a virtual keyboard. With the addition of an operating system and ability to access apps, cellphones quickly become the primary [mobile] device of use.

In 2009, Intelity introduced the first mobile hotel app for guest service and operational enhancements. In 2010, Apple again came to the market with a revolutionary product, the iPad. Not so long after, The Plaza Hotel in NYC was the first to set new standards for hospitality technology trend adoption by  providing an in-room iPad for guest use. In 2012, Conrad Hotels & Resorts, through a partnership with Intelity, introduced the first service-enabled hotel brand app; this development caused the industry to question and change its view of mobile technology as a bridge to guests.

In 2010 it was estimated that there were 62million smartphones in the US, by 2017 it is expected that the numbers will surpass 200 million smartphone users, nearly 65% of the country’s total population. I’m not sure anyone could have predicated the overwhelming rate that smartphones were adopted and how they have gone on to shape our everyday lives. Our phones have become an extension of our lives; we now have instant access to practically everything; from the latest news, to online shopping, banking services, live streaming, mapping and geo-location apps, the ability the control heating, ventilation, security via home automation systems, to the less rudimentary activities such as email, chats, social sharing, booking services such as taxis, and/or reservations. We have become so familiar with this ‘new’ way of doing things that the majority of businesses have had to adapt to meet our new consumer needs.

In the 1960s, the height of luxury expected from a hotel visit included air-con, complimentary in-room tea and coffee facilities, a mini-bar, and an in-room TV (still black and white). Fast forward 5 decades later, it is not longer necessary to check-in at the front dest, you can do that with your mobile device. Mobile keys are more convenient and more desired by guests.  Forget Showtime and The Movie Channel, you can now stream your preferred shows from the apps on your phone. Similarly, if you need any guest services, you can just get in touch with staff member via chat or the hotel’s app – no need to pick up the in-room phone. And while the in-room coffee and mini bar may still be there, more and more hotels are opting to offer baristas and pantry style canteens to create a more social atmosphere.

Step into the back office and the scene is slowly changing. While hotels were full of enthusiasm up until the 90s creating reservation systems and websites, many (not all) have been slow to adapt to newer hotel technology to make their operational lives so much easier and in the long run, financially better off. Those that have embraced the new mobile SaaS service have reaped the operational efficiencies; employees can process orders, bookings, payments, and check customers in and out, whenever, wherever. With communication now occurring more efficiently across departments, hotel mobility allows employees to provide services to guest anytime, anywhere leading to increased guest satisfaction.

While we have reached 2016, (and the end of our blog) the hotel technology developments continue on. This year in Japan, the Henn-na Hotel, the world’s first robot hotel opened, furthering conversations of automations place within hotel technology; new smart hotels are here, the concept of IoT is being brandished about. With 2020 fast approaching, we wonder what additional technological advancements will happen before the end of this decade!