Zoku – The Hotel built on the Needs of Future Guests [interview]

Listed in Forbes Top 25 Coolest Hotels, winner of the 2015 Radical Innovation Award as well as “Best Innovation & Disruption” from the Serviced.. 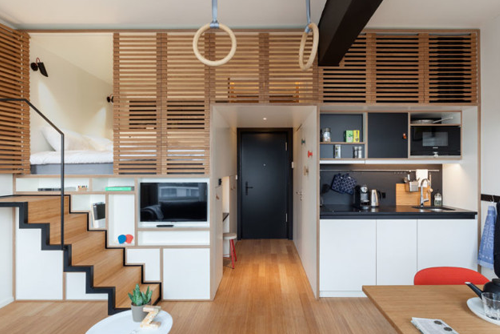 Listed in Forbes Top 25 Coolest Hotels, winner of the 2015 Radical Innovation Award as well as “Best Innovation & Disruption” from the Serviced Apartment Awards, Zoku is said to be the “Next big thing for people who work or travel” and has been described as “The Futuristic hotel, like “We Work” combined with AirBnb”. In a nutshell, Zoku is one of a growing number of distinctive properties worldwide that has moved away from the traditional front desk as a focus of activity on property, choosing instead to let guests design their stay, their own way. It is a concept that begins and ends with the guest, from design to amenities to hotel technology.

Having partnered with Zoku to apply StayNTouch solutions to give Zoku guests maximum choice, we had to sit down with Hans Meyer, one of the Managing Directors and Co-Founders of Zoku to discuss his latest concept, what sets them apart from other big global brands and why hotel technology plays an essential role.

StayNTouch: Where did your vision come from for a new hotel concept? What was the concept essentially based on, what were you were trying to achieve, what did you want to do that was different, and why technology of a different kind important to make that vision a reality?

Hans: I think at the time, when we started we found out that there were quite a lot of new innovations, so many innovations in the traditional hotel industry, changes where Cubic, Citizen M all those companies came out, they basically created new product categories where affordable and luxury came together and became, what we call, affordable luxury.

Also, we found, that the extended stay market is a very interesting segment – As people become more mobile than ever, internet gives us the opportunity to work independently from time and place, we’ve got open borders in Europe so we see a huge flux of people working across time zones and working across borders, and we also have got (received) some data that 50% growth until 2020 for short term assignments so they are very good markets reasons to enter into this market and especially if you look at Amsterdam, if you stay in Amsterdam for 3 month, there are very good options available, if you stay for one or two nights in a hotel its fine, but if you stay between 5 nights and 3 months, that was basically the gap where other operators were doing traditional things. So we said okay, we would like to create a kind of lifestyle offering into that segment which is known for being traditional and we took two fundamentals as a starting point, first of all guest centric design, it sounds very logical but… we start with people’, they have certain needs, certain frustrations, they have certain requirements and first we create a concept around those needs and requirements and then we go to designers.

StayNTouch: So, you say that it is guest centric; I think that you could probably go to Marriott and everyone and they will always say that their hotels are guest centric. The issue is the narrowing definition of who that guest is. Because Marriott is going to say ‘oh it’s guest centric’ but they are trying to cover a broader array of guests, they are trying to put the restaurant on the first floor because they want to make sure they get foot traffic off the street. Whereas you are saying, ‘we are focused specifically on this specific type of guest’?

Hans: I mean, as you said very clearly, we very much believe, I think that the hospitality market will move to a mass of niches instead of a mass market, which it always has been, and we are really focusing ourselves on a certain part of the market and we except that people from the other parts will not like us and that’s no problem at all, I mean, this segment is big enough, is growing extremely fast, if you don’t want to climb up the stairs there are a lot of other options here as well.

I think what we do differently, is that Marriott they do some research, and buy a report for ‘$2,000’ and they say okay we did some market research – what we did was I talked to 150 people from the tabloids myself, I talked to a colleague who worked in 35 different countries for Microsoft in the past 5 years, I talked to Expert Managers, HR Managers, Mobility Managers, and after that I started to live myself as a global nomad, I went 2 months in Buenos Aires, 2 months in Washington, 2 months in Bali, to really work remotely, internationally and run a company from a distance and feel how it is.

Hans: I think it is very cool to be able to take off on your own choosing and to step into the shoes of your target audience you get far more out of that.

Now, what do Marriott do? They say, ‘What would you like to have?’ and the people would say what they would like to have x, y and z. But, we didn’t say 15 years ago that we would like to have a phone where we can take pictures with, the internet and what have you, because people just don’t know what is possible so we ask people for their frustrations, for what they don’t like, for what’s happening, then we create a product and then we get validation. And that is something that we ask, what kind of product would you like to have?

StayNTouch: From inside out?

Hans: and then we go to validate it.

So that’s one principle of this guest centric design, and also what we did, we did all the validation of the last 5 years together with the target audience. We built 5 different prototypes of the loft, and during every single Loft, 150 – 200 people visited the Loft. We developed the Loft with two housekeeping companies in order to keep it efficient (the cleaning). We used mobile [e.g.] scanning techniques where people got [e.g.] scanners on the brain so we could measure anxiety and excitement.

Hans: but I mean that’s just really the way this company is organised.

Okay, so that is one part; guest centric design. Second is creating more value at less cost.

I, we, never look to hotels because hotels are very traditional business models, so for example, CitizenM which I worked on before, I looked at low cost carriers – Ezjet, Southwest, Ryanair etc. and what can I learn from their business model for a hotel model?

We have boutique hotels but they were very expensive and if look to TKMaxx H&M and Zara, fashion brands, they made fashion affordable. I learned from them. The car industry has a very ridged process, how they have been standardized, how to produce, what can I learn from them? And also with Zoku I looked to different industries to make that interesting, so what I learned from, for example, Uber, they have a seamless integration between online and offline, using an App.

StayNTouch: You have talked about operational efficiency outside of the guest, and you said that you were also interested in reducing costs – so how does your technology decisions fit into that goal.

Hans: Well I think I’m not from a service background originally so I’m not good with room service, I am not very deep into rooms but what I found out, is together with the iPads that are used in housekeeping, I think it’s a great opportunity to streamline processes. What we also found is during the last few weeks with a few system issues you really see the impact on the organisation, how negative it is. People get stressed out which does not help the guest experience at all. So from an operational point of view it’s crucial that your I.T. system works properly but still there and is simplified. Micros Fidelio or Opera might have started small but got bigger and bigger and bigger. I think, that you need to keep it simple, that there’s still a lot of intelligence to be found into companies and I think definitely ICT plays an important role.

StayNTouch: Last question. When we talked about you having a specific segment or audience, it was guests who were going to be staying for a longer period of time but also the guests who were looking for this luxury, or affordable luxury market. Do you think cultural notions about technology; the integration of phones etc. is helping your brand? In other words are you getting a lift from the fact that we’re now more of a technology-oriented culture?

Hans: Definitely, because I mean technology is such a major thing. If you look to the x pyramid – It’s the basic hierarchy of needs, first you need water, food and a roof, then you would like to meet other people and if you’ve met other people then at some point you will want to be self fulfilled, whatever you do, develop yourself, become an artist, it’s a very common model. Below that is, Wi-Fi because everybody is so much connected, some people just told me I think Wi-Fi is more important in a hotel and running water …and we put a lot of energy in getting the fastest Wi-Fi network here.

StayNTouch: I love the fact that I can plug in; there are outlets everywhere. I mean it’s really noticeable. It’s such a relief that you can sit down anywhere and you’re within a cords length of our your laptop and that’s a type of thing that removes a lot of stress; all you have to do is go to an old airport and everyone’s looking for the plug in the wall.

Hans: As that’s why we have USB in the rooms because I mean, you don’t have the adaptors, you just plug in.

StayNTouch: Which is also brilliant! Hans, it has been fantastic catching up with you and I look forward to meeting with you again.